A Brief Background of Education in Missouri, Development of the Public School Retirement System and Missouri Retired Teacher’s Association — 1960 to 2010

We need to look back at MRTA history to see how far we’ve come.   For 41 years, the only source of funds for Missouri schools as a territory and as a state was from the Federal Grant through a land grant (no deed, no patent).  Much work went on to even get that grant. One example: In 1804, Mr. Thomas Reddick from St. Louis rode horseback to Washington D.C. (at his own expense) to plead for passage of the Act granting land for schools.

So much background and work has been done on the development of education for schools of Missouri.  During the great depression, teachers sometimes were not paid for the last two months of school.

The development and adoption of the fourth Missouri Constitution in 1945 was very important to education.  A significant change was the establishment of an appointed State Board of Education which was then given the power to appoint a Commissioner of Education.

Superintendent Hubert Wheeler of Marshall, Missouri, was appointed the first Commissioner of Education. The maximum salary was $5,000.  Consolidation of schools was implemented during his leadership in 1949.  As a result of this reorganization, the County Superintendent of Schools was abolished.

Many improvements in education have been made.  State aid became available. The foundation program and cigarette tax were of much benefit to education, with the funding formula being increased several times.

Special Education became an area of need.  For the handicapped, area schools for the trainable were established in 1957.  Important programs for all handicapped, including home instruction and transportation, were attained in 1959.  Programs for the emotionally disturbed came in 1968 and compensatory education in 1969.

Many retired teacher groups had organized over the state.  The Missouri Retired Teachers Association and Public School Personnel was organized in December 1960 by a group of eleven retired teachers meeting in Jefferson City, Missouri at the Governor Hotel.  The five school system areas represented were St. Louis City, St. Louis County, Columbia, Lebanon and Springfield.

In 1964, Mr. Babb was appointed the National Retired Teachers Association Director of Missouri.  Dr. Ethel Andrus was the President of the NRTA at the time.  A quote from Dr. Andrus, “Do something outside yourself.  Make life richer by your efforts and ideas.  As teachers, we have the most marvelous experience in the world.”

Minutes of the March 1962 State Meeting showed 2,549 retired teachers in Missouri. This did not include St. Louis and Kansas City.  MRTA membership at the time showed 649 members.

In 1972, a very important legislative change was made in that final average salary would be determined on the basis of total earnings for the five consecutive years instead of 10 consecutive years.

MRTA is Missouri’s largest and only Education Association where the Public School Retiree is the #1 priority. 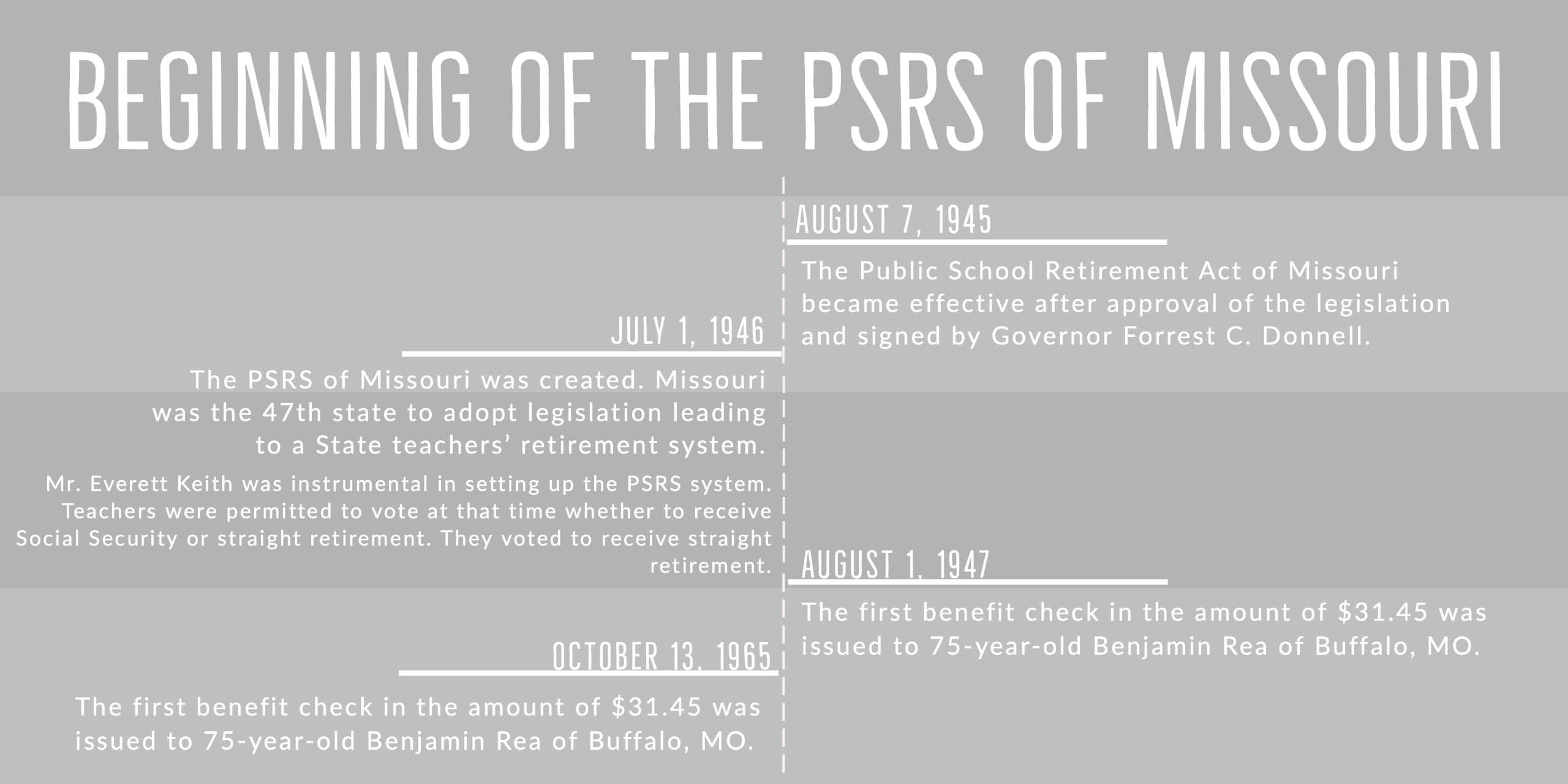 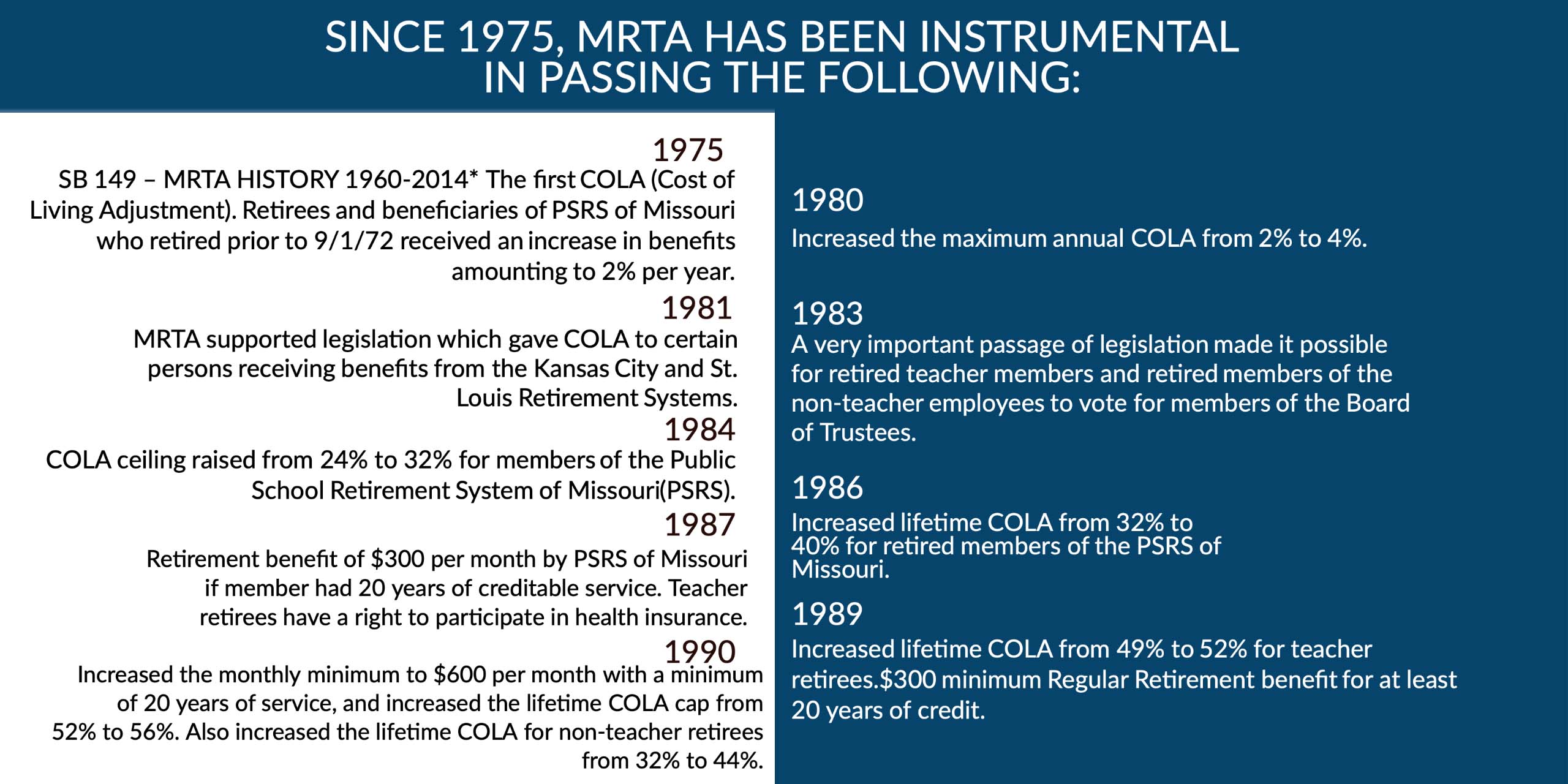